WordPress 5.0 is out. Here’s a tour of the new features! Blocks make it easier to work with WordPress

This new release will let the users insert any type of multimedia in a snap and rearrange as per the content. The content pieces will be arranged in the blocks which makes the process of uploading easy. WordPress 5.0 comes with the new Twenty Nineteen theme that features custom styles for the blocks.The editor styles are used in the themes to enhance them. Twenty Nineteen features ample whitespace, and modern sans-serif headlines along with serif body text. It also uses the system fonts for increasing loading speed.Twenty Nineteen can work for a wide variety of use cases, be it a photo blog, launching a new business, or supporting a non-profit cause.

The classic editor plugin is very useful as it restores the previous WordPress editor and the Edit Post screen.

This new release has got some negative reactions from the users. Few think that the blocks won’t make things easier but would make the entire process complicated. Also, the release has received heat for having been announced on the wrong timing, as Christmas is almost around and retailers won’t be able to support the process of teaching the process of the new editor to the staff. Also developers will have to fix client sites broken by the new editor on an immediate basis and this might definitely create chaos.

One of the users said, “Okay, I’ve now tested it on my main site, and I can definitely confirm that it’s not a good fit for blog posts/news articles. Took me forever to post a simple 300 word article, in part because of all the random spaces it kept removing when I copied in paragraphs from my text editor.” 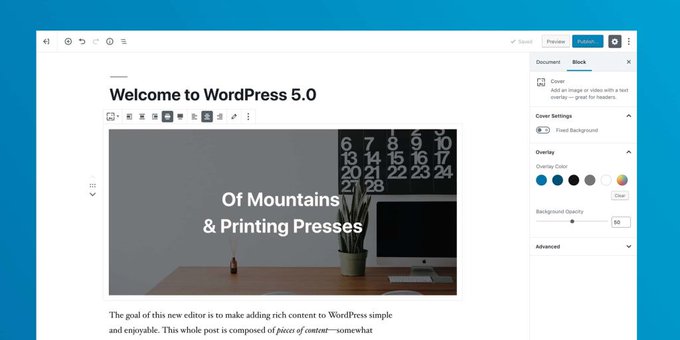 Last month’s Gutenberg release was met with disappointment and many ended up- uninstalling it,  with major issue being the lack of Markdown support. Usually before posting an article, a user writes it on Google docs or Microsoft word and then copies it to WordPress. Gutenberg makes it difficult for users to copy paste content as they must create the blocks multiple times given that every element is considered as a block. Also, it is still somewhere  between a post editor and a site builder plugin. One has to rewrite everything on Gutenberg as the blocks are complex. It could work best for large publishers who are comfortable with complicated layouts. Those working on HTML and CSS might find this jump to Gutenberg which is based on Javascript and React framework, very complicated. The idea of Gutenberg getting integrated with Core won’t be accomplished any day sooner as it has to go under a lot of documentation and work is still pending.

But there is still hope for Gutenberg, as the page builder market might appreciate the efforts taken for this editor. It could work well for the ones aiming for static content.